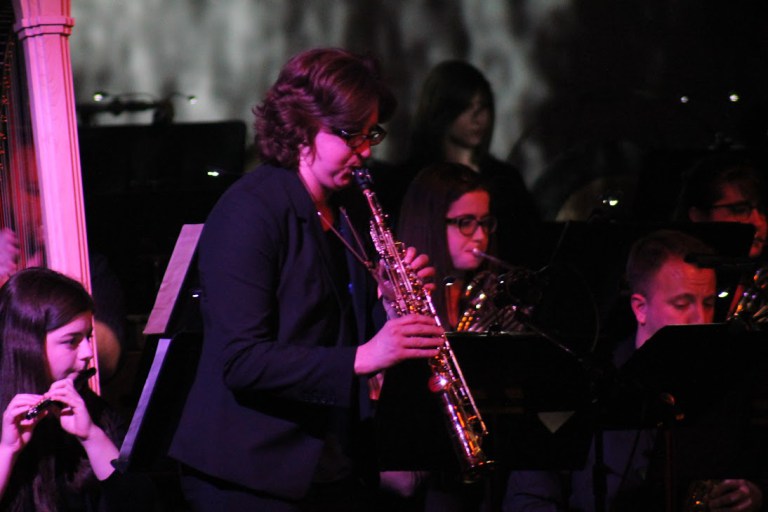 Professor Mitchell has been the Adjunct Instructor of Saxophone at The College of New Jersey for nearly twenty years. An appointment she is most proud of because of the inspiration she derives from her students and colleagues. She feels blessed to be in such good company. Ms. Mitchell just finished conducting the 3rd Annual Saxophone Summit at TCNJ, with over sixty saxophonists from across New Jersey participating in a saxophone choir, masterclasses, and performances. Recently, she soloed with the TCNJ Wind Ensemble. Performances included, Velocity Meadows, Stark, Dreams In The Dusk, Biedenbender and recordings on the album Wind Tableaux, Mark Records.

Ms. Mitchell is the jazz director at Eastern High School and Saxophone Ensemble Instructor for The Youth Orchestra of Bucks County. She has been on the music faculty of Rowan University, The Governor’s School of Music, Haverford University and the Conservatory of Musical Arts. She has given Master Classes at Temple University and University of the Arts in Philadelphia.

Respected as an outstanding saxophonist, she has performed with many groups, including Concerto Soloists, and Astral Artists of Philadelphia. Orchestral experiences include performances with members of the Philadelphia Orchestra, Curtis Institute of Music, Reading, Allentown, Haddonfield Symphony, and Chamber Orchestra of Pittsburgh. She is proud to have had the opportunity to perform for Lucas Foss, Yuri Temirkanov and Recorded Music for Prague 1968, by Karel Husa, conducted by Karel Husa. She has performed with Peter Schickele, David Bilger, Stanley Clarke, Elvis Costello, and KlezMs. She can be heard at http://www.ronthomasmusic.com/ on Ghost In The Weed Garden, Nocturne, Doxology, and Elegy for Stefan Wolpe. Kathy has appeared as a soloist and clinician throughout the United States. She has performed with theater companies throughout Pennsylvania and New Jersey including the Walnut Street, Media and Arden Theaters, The Knitting Factory, Radio Broadcasts, Soundtracks and various other recordings. Kathy is currently a member of The Philadelphia Saxophone Quartet with whom she has released several albums.

Kathy holds a Bachelor of Arts in Music Education and Music Performance from Temple University and a Master of Music Performance in Saxophone from Northwestern University.  She studied saxophone with Dr. Frederick L. Hemke and Marshall Taylor, both students of Marcel Mule.

Educator and Musician for over 20 years.